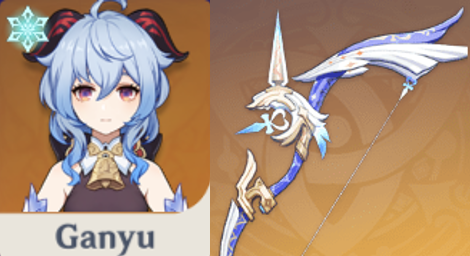 IDEA use Ganyu of level 90, and has the following attributes:

The weapon used by Ganyu is Amos’ Bow. The Amos’ Bow has the following attributes:

Let we assumed that Ganyu’s attack will always hit the target, and the two sections of damage are independent. Each section of damage will cause critical strike or not depends on the CRIT Rate. Since Ganyu is very powerful on her own, we are not considering the bonus damage from elemental reactions in this problem.

The damage calculate formula is following:

If there is no critical strike:

If there is critical strike:

Now let we explain these parameters.

Elemental DMG bonus is only provided by artifacts, and only applies to attacks of the corresponding element.

CRIT DMG is the sum of character’s base CRIT DMG and the CRIT DMG provided by weapon.

Ratio of damage taken by monster

The resistance of monsters

The monsters in this problem have the following element affected states:
None, Pyro, Hydro, Dendro, Electro, Anemo, Cryo, Geo, Frozen.

There are five kinds of artifacts in Genshin Impact for each part of the character:
Flower of Life, Plume of Death, Sands of Eon, Goblet of Eonothem, Circlet of Logos.

You can equip five parts of your character with these Artifacts, but remember that you can only equip only one Flower of Life , one Plume of Death, one Sands of Eon one Goblet of Eonothem and one Circlet of Logos. For example.you can’t equip two Flower of Life for your character.

There are multiple set of the Artifacts.
Equipping 2 or more items and 4 or more items in the same set of artifacts will trigger the set bonus. Each artifact exist 5 attributes. The possible attributes are following:

Except for the attributes that begin with “Numerical” and the Elemental Mastery, all attributes are percentage bonus.

In this problem, we only considerate following two sets of artifacts:

4-piece set bonus: Increases Charged Attack DMG by 35% if the character uses a Catalyst or a Bow.

In each test case, give you some artifacts and tell you what monster Ganyu faced, please calculate the expected damage for a charged attack.

Promised that the artifacts in input data are legal.

There are multiple test cases.

The first line contains a integer $n(n\leq 5)$, denoting the number of artifacts.

The second line contains a string indicate the monster name.

Then for each artifact, first give you the artifact’s name in one line.

For each test case, print the value of expected damage for a charged attack in one line. Round up to integer.