Given a triangle ABC, the Extriangles of ABC are constructed as follows:

On each side of ABC, construct a square (ABDE, BCHJ and ACFG in the figure below).

Connect adjacent square corners to form the three Extriangles (AGD, BEJ and CFH in the figure).

The Exomedians of ABC are the medians of the Extriangles, which pass through vertices of the original triangle,

extended into the original triangle (LAO, MBO and NCO in the figure. As the figure indicates, the three

Exomedians intersect at a common point called the Exocenter (point O in the figure).

This problem is to write a program to compute the Exocenters of triangles. 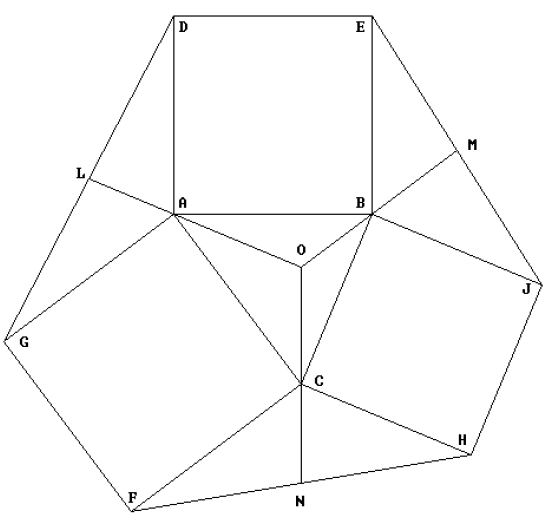 The first line of the input consists of a positive integer n, which is the number of datasets that follow. Each dataset

one vertex of a triangle. So, there are total of (n*3) + 1 lines of input. Note: All input triangles wi ll be strongly

non-degenerate in that no vertex will be within one unit of the line through the other two vertices.