In a modernized warehouse, robots are used to fetch the goods. Careful planning is needed to ensure that the robots reach their destinations without crashing into each other. Of course, all warehouses are rectangular, and all robots occupy a circular floor space with a diameter of 1 meter. Assume there are N robots, numbered from 1 through N. You will get to know the position and orientation of each robot, and all the instructions, which are carefully (and mindlessly) followed by the robots. Instructions are processed in the order they come. No two robots move simultaneously; a robot always completes its move before the next one starts moving.

A robot crashes with a wall if it attempts to move outside the area of the warehouse, and two robots crash with each other if they ever try to occupy the same spot. 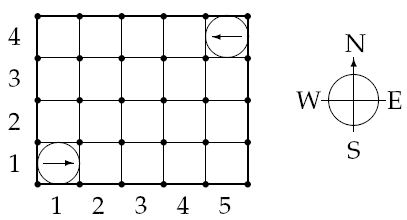 The first line of input is K, the number of test cases. Each test case starts with one line consisting of two integers, 1 <= A, B <= 100, giving the size of the warehouse in meters. A is the length in the EW-direction, and B in the NS-direction.

Figure 1: The starting positions of the robots in the sample warehouse

Finally there are M lines, giving the instructions in sequential order.

An instruction has the following format:

Where is one of

Output one line for each test case:

*OK, if no crashing occurs.

Only the first crash is to be reported.