Chessy Chess is a simple two-person game. It is played on an 8 x 8 board. Each player has one piece. The players take turns in moving their respective pieces.

All other positions are called open fields, even if they are occupied by either of the pieces. 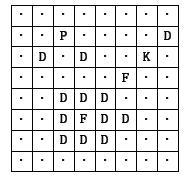 The game ends, when

The first line of input file contains a single number : the number of test cases to follow. Each test case has the following format:

. A description of the board, consisting of 8 lines, corresonding to the 8 lines of the board, from top to bottom. Each line contains a string of 8 characters from {‘F’, ‘D’, ‘.’}. Here ‘F’ denotes a forbidden field, ‘D’ denotes a fixed dangerous field and ‘.’(a period) denotes an open fied.

Of couse, an open field may become dangerous due to the position of the Black pawn.

For every test case in the input file, the output should contain a single line containing the string “White”(if White wins) or “Black” (if Black wins).

The first test case below corresponds to the pictures in the problem description.