A chessboard has 8 rows and 8 columns, you can see it below. Give you knight, queen, rook’s positons. You should determine the minimal number of moves the knight needs to capture both the rook and the queen, assuming neither of them moves. You may capture them in either order - rook first or queen first. 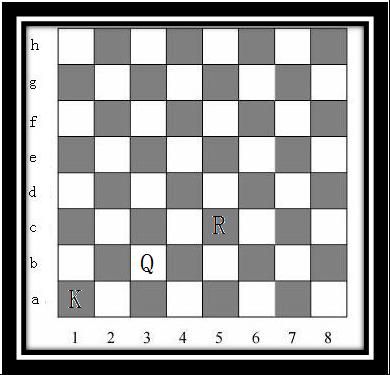 Each test case consists of three string: knight’s positon, queen’ positon and rook’s positons. The position will be formatted as “cr”, where c is a character between ‘a’ and ‘h’, inclusive, determining the row on the board (‘a’ is the lowest, ‘h’ is the highest), and r is a digit between ‘1’ and ‘8’, inclusive, determining the column (1 is the first column, 8 is the last).

For each test case,output the minimal number of moves the knight needs to capture both the rook and the queen.

*The knight cannot jump out of the board.