2815. Largest Empty Circle on a Segment

We are given line segments on the 2D plane. We want to find the maximum radius of an empty circle whose center coordinates are constrained as follows:

A circle is empty if no part of a segment is located strictly inside of it (thus, a segment may touch the circle, but may not intersect with the interior of the circle). 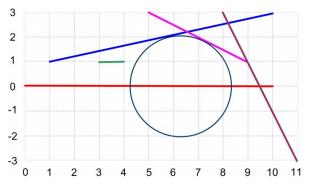 For each test case print a line containing a real number , denoting the maximum radius of an empty circle whose center obeys the constraints. The number must be printed with decimal digits (the number must be rounded up or down according to the usual rounding rules).